Room 5 “Our place” inquiry has provided us with the opportunity to learn about some native inhabitants, who live in New Zealand.

I wonder if a kiwi baby has no hair when it is born? I wonder why kiwis have no ears and a hole instead? I wonder why some kiwis are white? (Kian)

I wonder why kiwis are nocturnal? I wonder what they make their nests out of? (Lilee)

An information report was something new to the class, so we worked through the process together. Next, we looked at an example Mrs O’Sullivan had written and broke the report down into more manageable chunks. 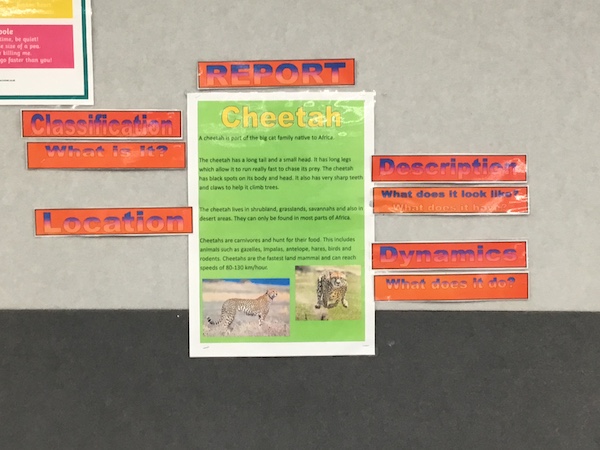 Next we de-constructed each part to find out what needed to be included. This is what we found out - A classification is the first part of a report which describes what it is.

A description talks about what it looks like or what it has. As a class we learnt how to label the parts of a kiwis body which helped us to write this part of the report.

Location talks about where it lives, both its habitat and the country it lives in.

Dynamics provides the reader with information about what it does - what it eats was one area we looked at as well as any other special information we wanted to tell our readers.

The kiwi looks like a chicken but it has small wings. (Jackson)

The kiwi has small wings and they are fluffy and soft. (Benjamin)

The kiwi eats worms and weta and leaves. They can’t fly and they can’t swim. (Aria)

The kiwi lives in a burrow. He has brown feathers. (Falanisi)

The kiwi has nostrils on the top of its beak. The kiwi is a bird that can not fly. A kiwi eats grass and leaves. (Logan) 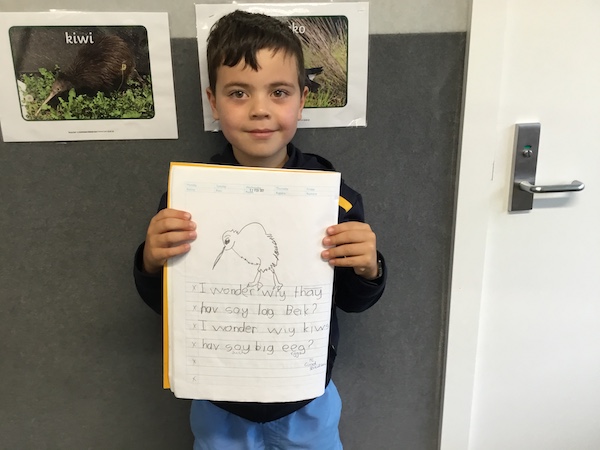 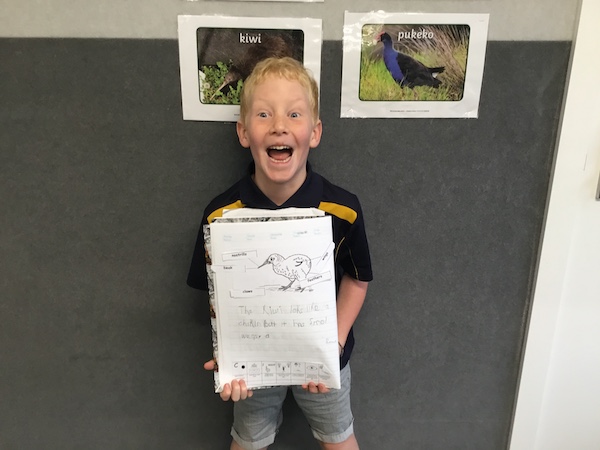 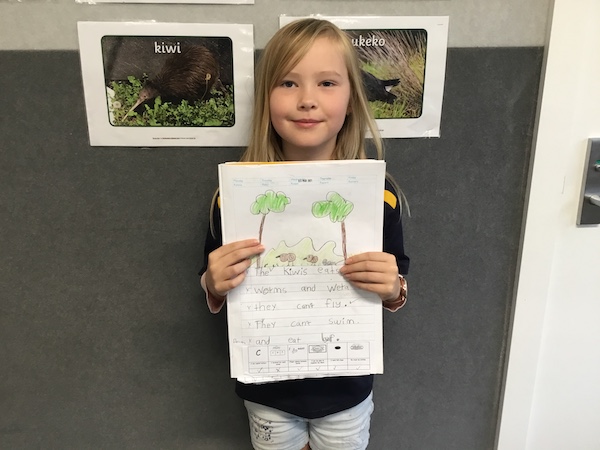 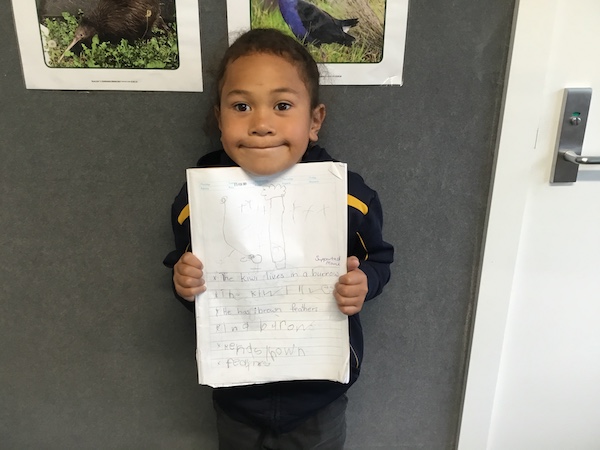 Multiple exposures is one of the High Impact Teaching Strategies which supports the writing achievement.

The “Optimum Learning Model promotes a structure to writing - “I do, we do, we do, you do”.

Our kiwi writing demonstrated this process - “I do” where we pulled apart an example that the teacher had constructed to find out the structure of the information report. The “we do” took place over several weeks when the class worked together to construct each part of the information report. The “you do”, the final part of the process, will involve the students working independently or in pairs to create their own report which provides readers with information about another of our native neighbours.

The writing process is an essential part of learning to be a successful writer. We were lucky enough to have a fantastic buddy class (Room 9) who supported the students in Room 5, so they could publish their kiwi reports, so others could enjoy them.

Here are some of the Information Reports about kiwis that Room 5 created over several days.

The kiwi is a native bird that can’t fly. The kiwi is soft and fluffy. Kiwis are omnivores. They eat bugs and worms and plants. (Elyse) 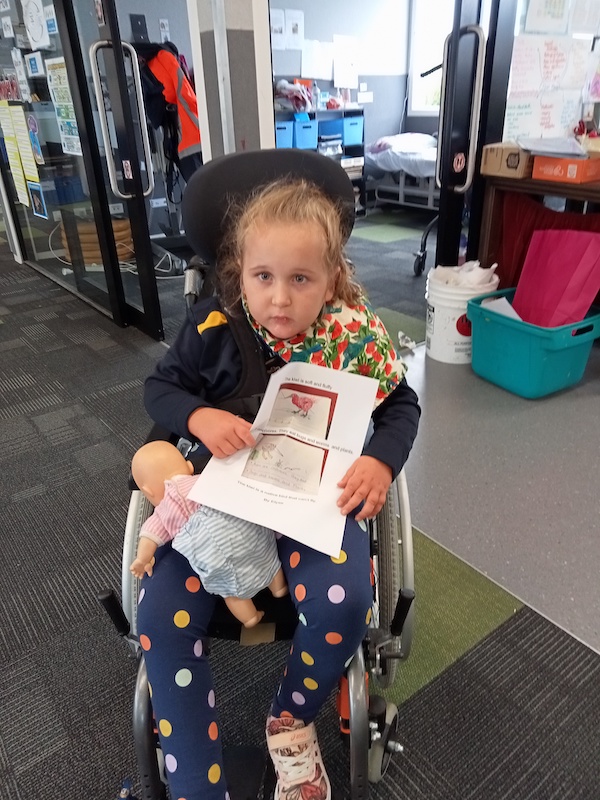 A kiwi is a native bird that can not fly. The kiwi has small wings. Kiwis have sharp claws. Kiwis look fluffy and soft. The kiwi have brown and sometimes white feathers. The kiwi lives in burrows made from twigs, leaves and grass. Kiwis can only be found in the wild in New Zealand. Kiwis are nocturnal. Nocturnal means they only come out at night and sleep through the day. Kiwis eat worms, insects and aphids which all come from out of the ground. The kiwis have big eggs so that kiwi babies can be strong and healthy. (Thea) 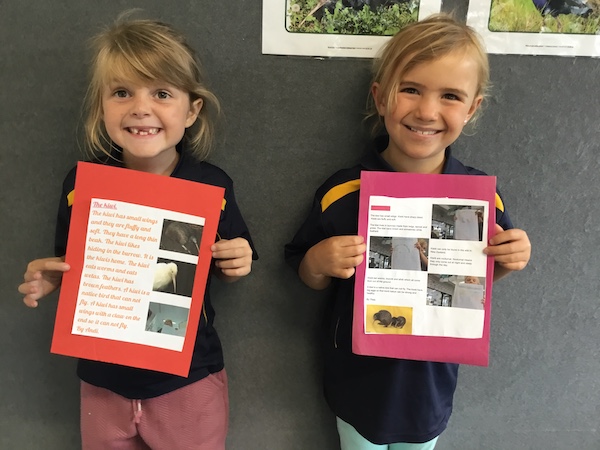 The kiwi is fluffy, soft and brown. Kiwi have short wings. Kiwis have sharp claws and a long beak. Kiwis can’t fly. Kiwis live in a burrow and old trees. Some kiwis live in a zoo. Kiwis live only in New Zealand. Kiwis only come out at night, they are nocturnal because they are scared of people. Kiwis eat worms and insects like snails. Their eggs are huge. Kiwis have big eggs because they help to make their baby hear. (May) 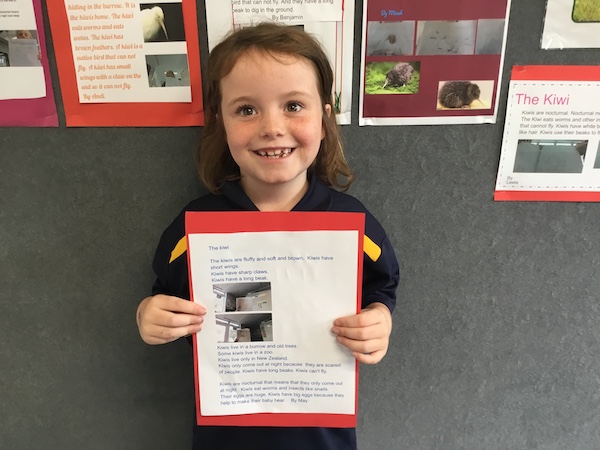 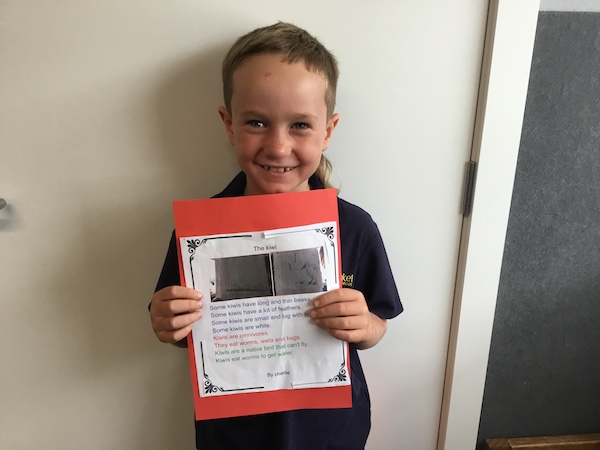 A kiwi is a native bird that can’t fly. The kiwi have long and thin beaks with nostrils at the end. They have a fluffy body and small wings. Kiwis live in a dark burrow under a tree. They have twigs and leaves in their dark burrow. Kiwis only live wild in New Zealand or sometimes in the zoo. All kiwis come out at night because they are nocturnal. Kiwis eat worms and weta. They get their food from under the ground. Kiwis live outside in the bush. They sleep in the bush with their mum. The kiwis have big eggs so that they can have big, strong and healthy babies. (Frankie) 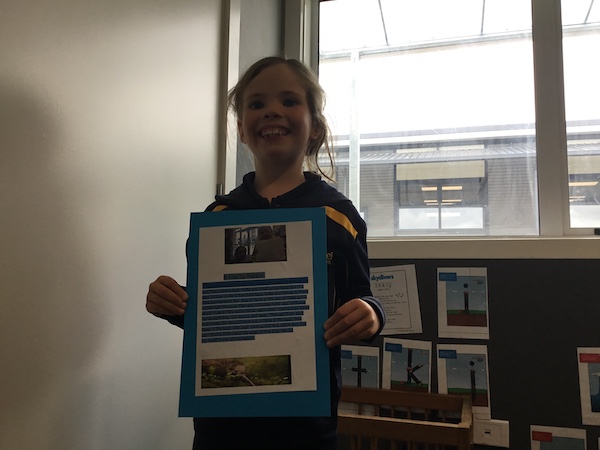 A word wall is a collection of words which are displayed in large visible letters on a wall. The word wall is designed to be an interactive tool for students and contains an array of topic specific inquiry words that can be used during writing and reading.

Three reasons to use word walls:

The writing process, complete with peer review and feedback, allows students to learn from each other. Creating these environments at a young age teaches students to both accept and deliver constructive criticism. Junior children can begin to self and peer assess their writing and identify next steps.

Dialogue for the children using the visual checker.

Student 1 - “What does this picture mean?”

Student 1 - “What does this picture mean?”

Student 2 - It means have I stretched my words. Here is a word I have stretched “k-i-w-i”. She circles the word.

Student 2 - “I need to leave finger spaces between all my words”.

Student 2 - “I know this because I have not ticked it on my visual checker”. 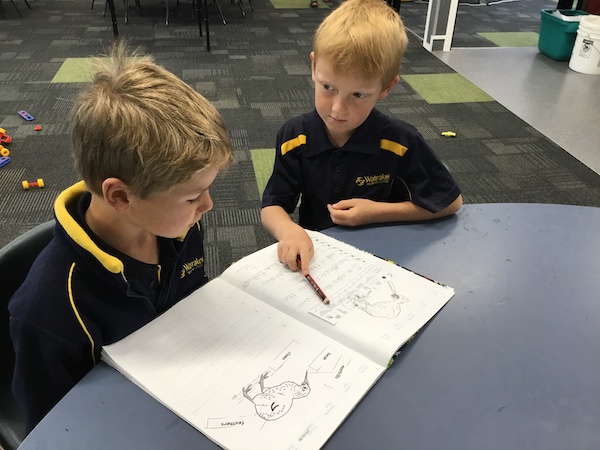 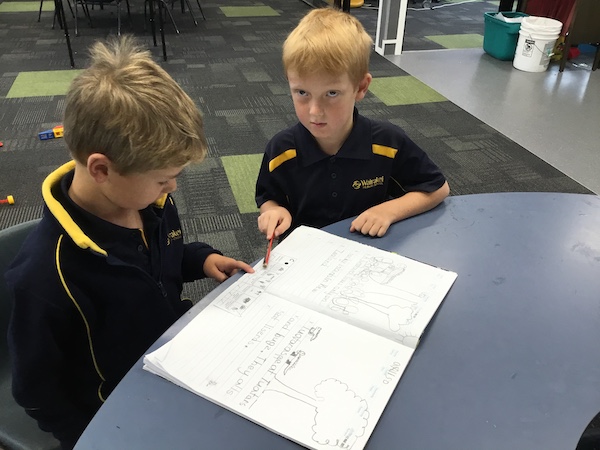 The class discovered a Maori legend which described “How Kiwi Lost his Wings”. We watched a video and practised retelling the story using our picture prompts. The students identified the beginning, middle and end of the story and used sequencing words “first, next, then and finally” to retell the story to our buddy class. 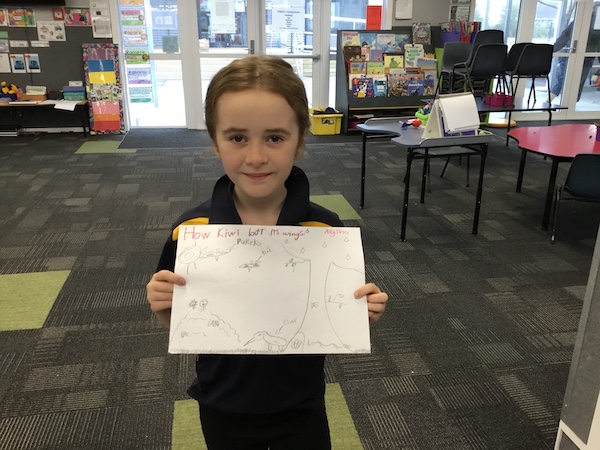 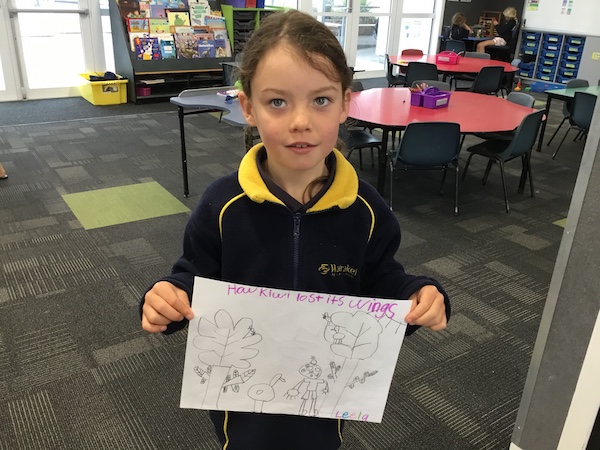 As a parent, you will be able to  follow our writing journey in Room 5. Our next challenge is to learn more about a little friend who hides between rocks and is a distant relative of the dinosaur. 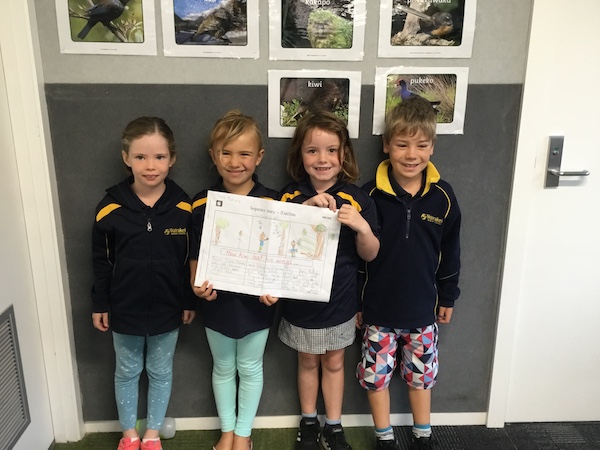