Room 15’s inquiry into ‘Dinosaurs’ continued with the students learning about the SOLO terms - describe, sequence, imagine, create and apply.

The Room 15 students worked in small groups to label parts of our favourite dinosaurs. We noticed that the meat eating dinosaurs all had sharp teeth and claws while the plant eating dinosaurs had blunt teeth. Together we wrote a description to describe what each of our dinosaurs looked like. 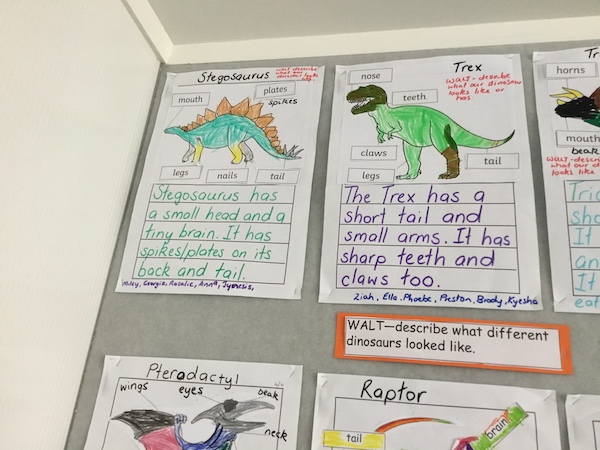 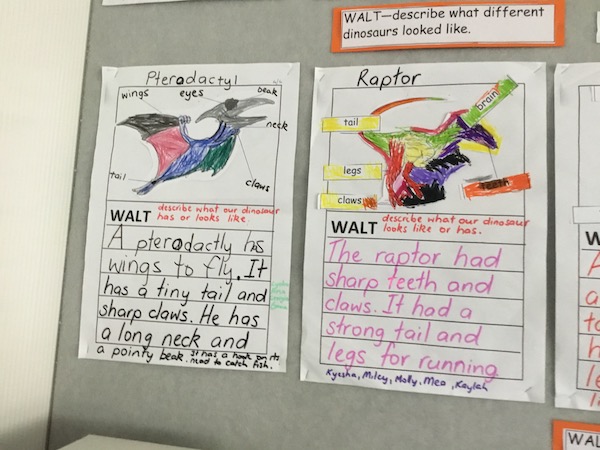 We discovered that dinosaurs came in our shapes and sizes. We researched the size of each dinosaur. As a group we sorted our dinosaurs from the smallest to the biggest. We found the smallest dinosaur was a Heterodontisaurus which was 1 m long. Still bigger than most of us in our class. The biggest dinosaur was an Argentinosaurus which was 35 m long. Bigger than the length of our school courts. 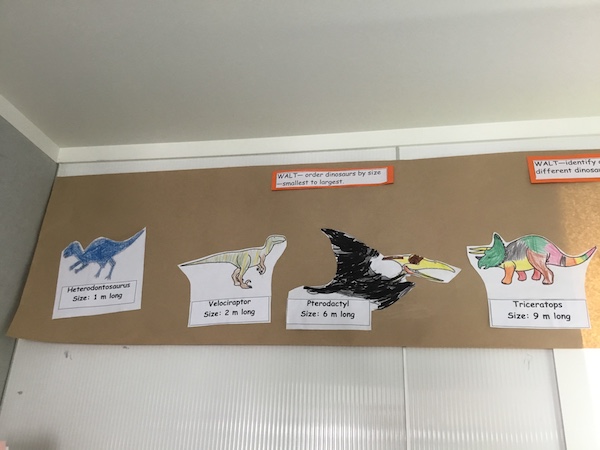 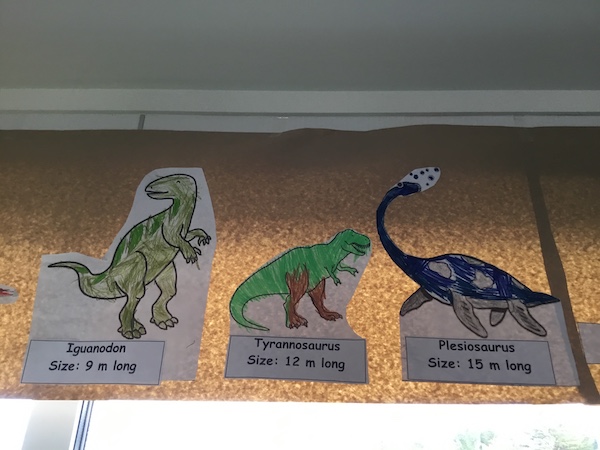 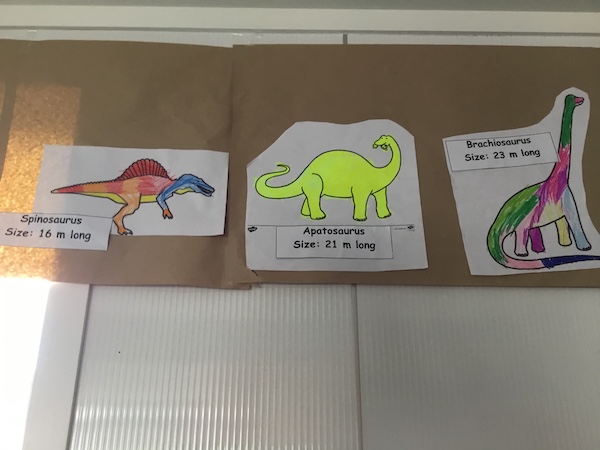 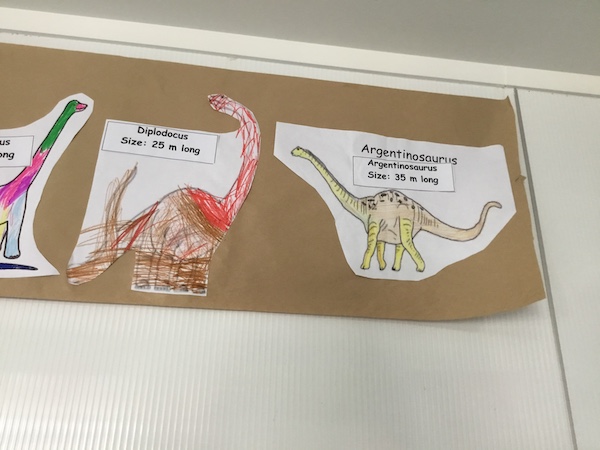 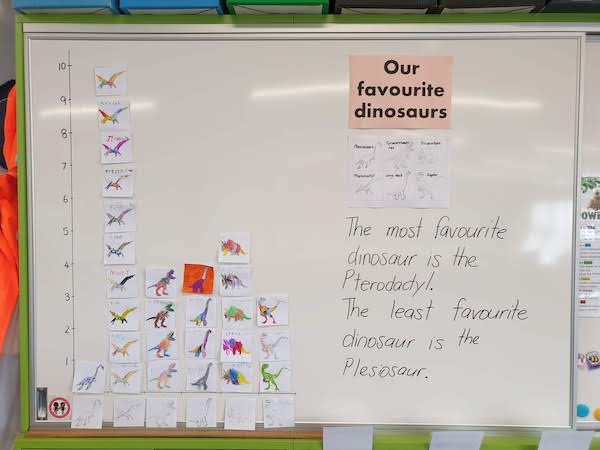 Our class inquiry this term has been “Dinosaurs” so the students decided that would be a great theme for our calendar art this year. First we practiced sketching dinosaurs using youtube i.e. Trex, Stegosaurus, Triceratops, Pterodactyl. Actually we practiced a lot … Next we dyed our background a dusty red to represent the desert environment that some dinosaurs lived in. Then the students created a volcano by making a cone shape out of brown cardboard then adding red, orange & yellow tissue paper to represent lava. Finally, we created painted rocks using a patching effect with black and white paint. 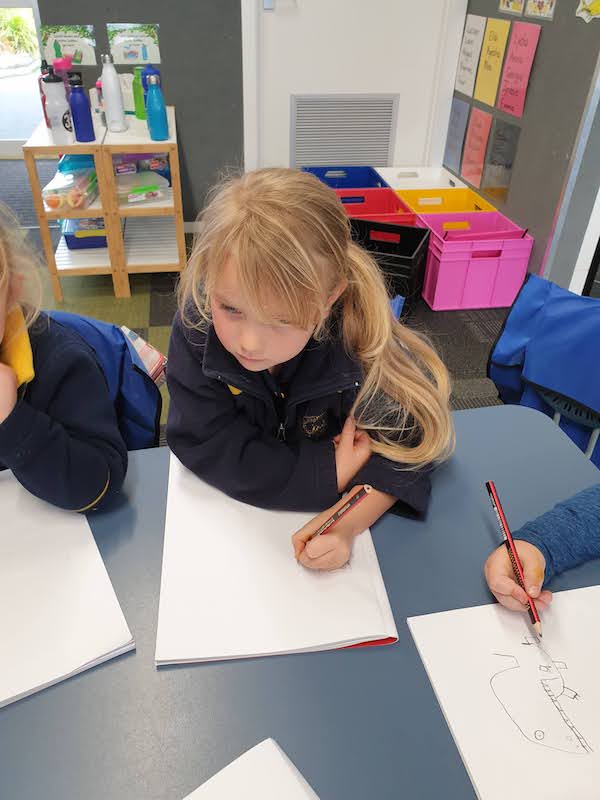 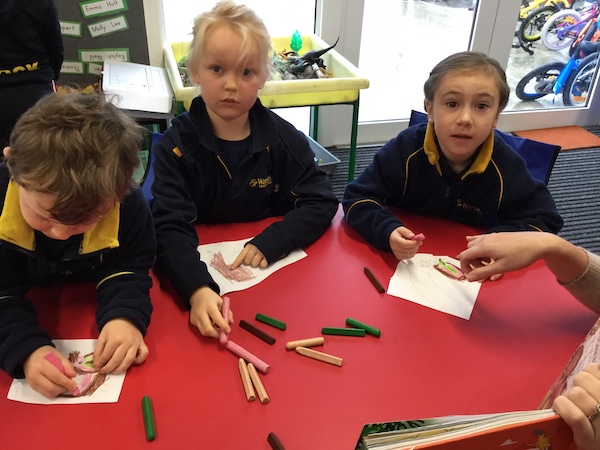 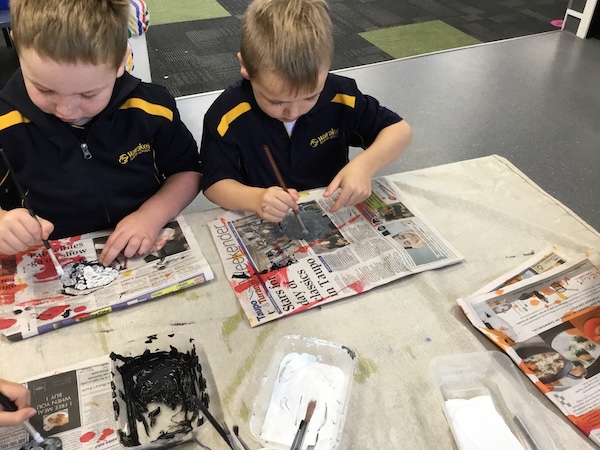 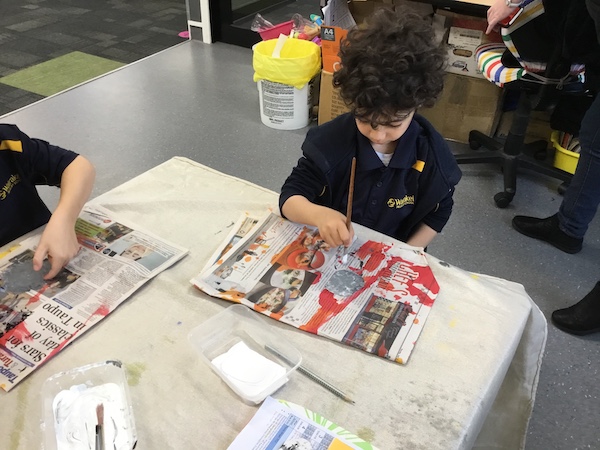 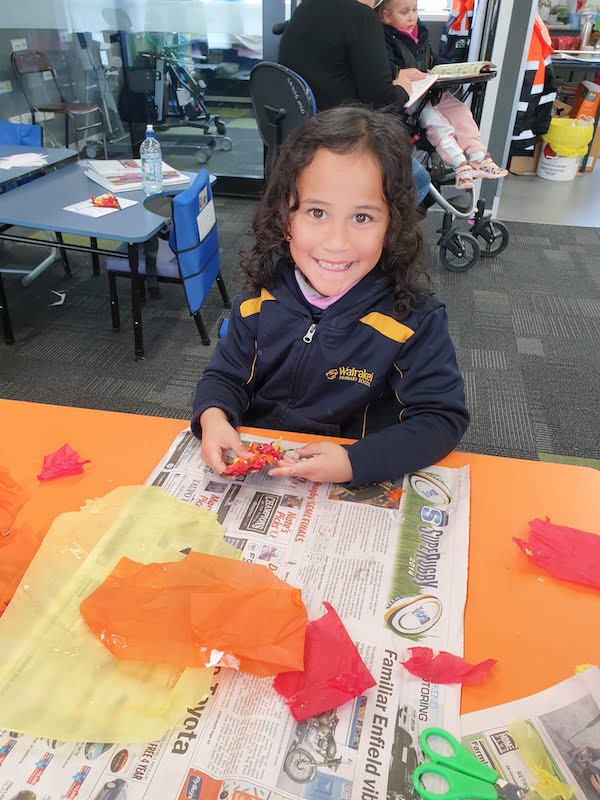 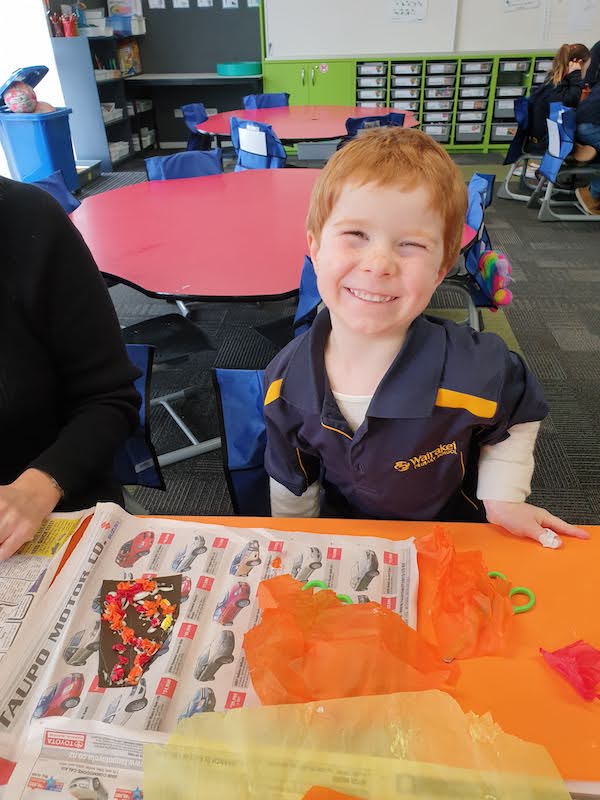 To “apply” (SOLO verb) the knowledge we had developed around dinosaurs we imagined and created our own dinosaur using the head, tail, legs, features of a variety of dinosaurs. The children then gave their dinosaur a name. Mrs O’Sullivan’s writing group wrote a poem using the similes “like” or “as” to describe what their dinosaur looked like and did. Room 15 made Imaginosaurus Dinosaur Book Creatorto share their creations on Seesaw.

Flyalototops - My dinosaur’s skin looks bumpy like a camel. He has a lot of colours. He flies as fast as a cheetah. My dinosaur eats blue things like berries and bubble gum. (Kyesha) 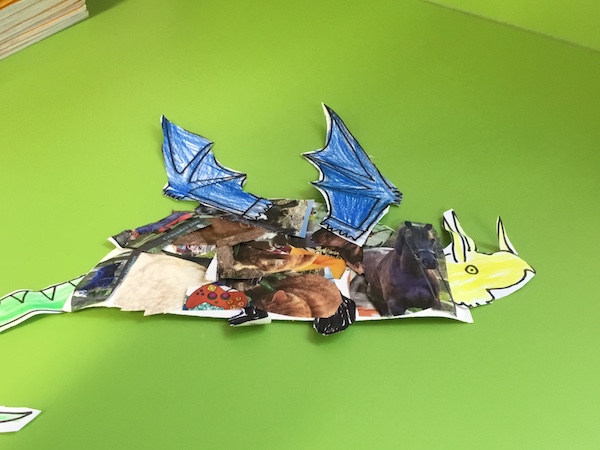 Turtlerex - My dinosaur looks like a turtle because he has little legs. It’s face looks happy. It flies as slow as a snail. My dinosaur eats chewy things like bubble gum and lollipops. (Ella) 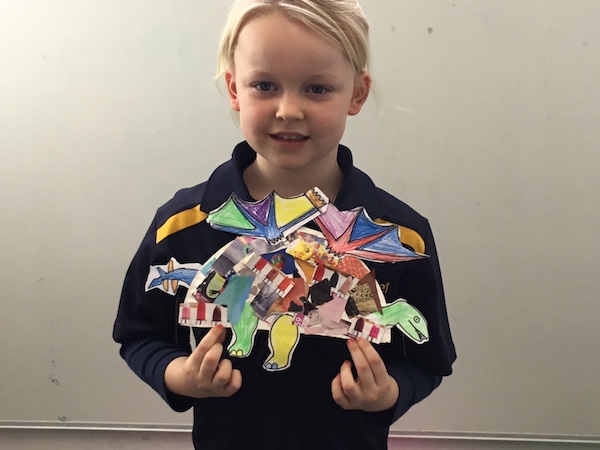 Flyapleasiosaurus - My dinosaur’s skin looks bumpy like a jump. It’s face is happy. It flies as slow as a tortoise. My dinosaur eats red things like raspberries. (Miley)

Stompasaurus - My dinosaur’s skin is pointy like a star. It’s face looks happy. It flies as fast as a cheetah. My dinosaur eats chewy things like lollies and nectar from plants. (Kaylah) 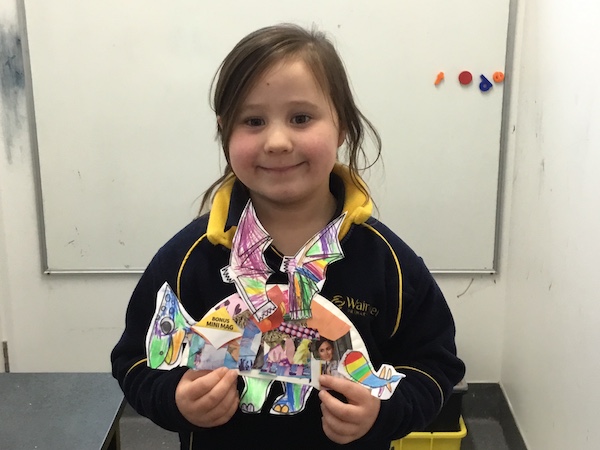 Meaosaurus - My dinosaur’s skin looks colourful like a rainbow. He is as big as a house. It flies as slow as a tortoise. My dinosaur eats red things like strawberries and other berries. (Mea)

Lucianasaurus - My dinosaur’s skin looks spiky like a hedgehog. He is very big. It flies as fast as an ostrich. My dinosaur eats green things like leaves and grass. (Lucian) 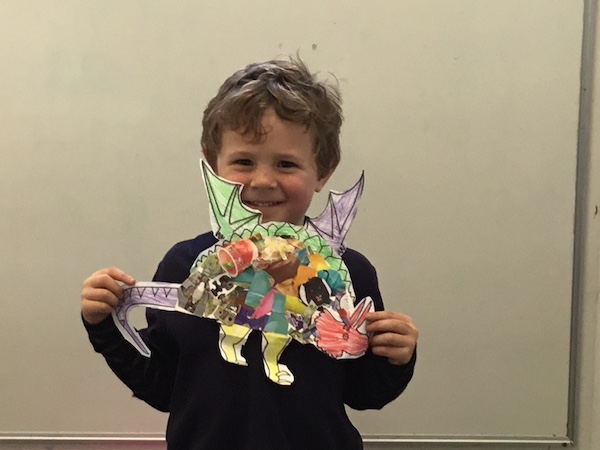 The outcome of our ‘Dinosaur’ inquiry this term is that we now have many expert paleontologists in Room 15 who could answer any questions you have about this prehistoric creature. 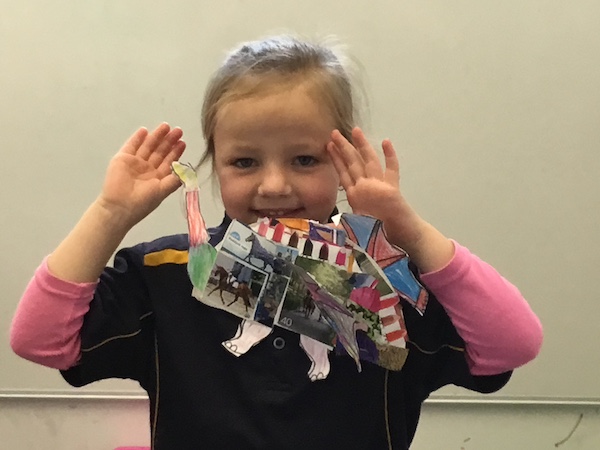